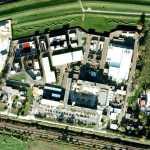 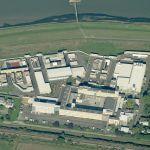 By giove @ 2009-04-08 06:46:24
@ 51.441583, .40496
Gravesend, United Kingdom (GB)
Metropolitan Police Specialist Training Centre (MPSTC) is located in Gravesend.
The £55m MPSTC was built by Equion (part of the John Laing group) in a Private Finance Initiative (PFI) deal. It was officially opened in April 2003 and provides the capital's officers with firearms and public order training by tutors from The Met's CO12 branch.

Brave students in riot gear are taught how to deal with petrol bombs being thrown at them. Weapons training is provided on indoor laser ranges and outdoors on the Army's old Milton Range further east. The MPSTC includes a mock-up of a mini town including a bank, shops, night club and even a football stadium. Also featured are train and underground stations with full size carriages and a section from a passenger jet – utilised to great effect by specialist firearms officers from Scotland Yard's elite CO19 (formerly SO19) branch.

In early 2009, the Gravesend facility played a crucial role in the Met's training to deal with the possibility of rioting protestors at the G20 Summit of world political leaders, as part of the massive police and counter-terrorism security plan codenamed Operation Glencoe.
Links: homepage.ntlworld.com
9,966 views

Anonymous
@ 2012-02-07 04:22:05
This site was originally designed for use solely by the firearms department, but the public order unit was squeezed in when the lease on their place in Hounslow unexpectedly ran out...