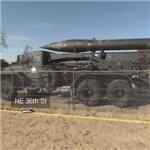 By kjfitz @ 2009-01-31 11:44:24
@ 35.507683, -97.474114
Oklahoma City, Oklahoma (OK), US
The MGR-1 Honest John missile was the first nuclear-capable surface-to-surface rocket in the US arsenal. Designated Artillery Rocket XM31, the first such missile was tested in 1951 and deployed in January 1953. The designator was changed to M31 in September, 1953 and were deployed in Europe several months later. Alternatively, the missile was designed to be capable of carrying ordinary high-explosive warheads, even though that was not the primary purpose for which it was envisioned. It featured in the BBC docudrama The War Game in battlefield scenes in Berlin.
Links: virtualglobetrotting.com
888 views