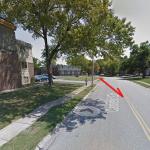 The red arrow in the SV thumbnail indicates the location of where Michael Brown's lifeless body was located.

Warning: The YouTube video is graphic with the body of Michael Brown laying in the street with a POV of about 30 feet away. Michael Brown's body was located approx. parallel of the sign for 2943 on the side of the apartment building on the north east side of Canfield Dr. and in the middle of the street.
Links: www.youtube.com, en.wikipedia.org, www.google.com
3,063 views

TROTER
@ 2014-08-19 02:31:04
The original YouTube link above has gone private but here is something later and probably won't be deleted:
http://youtu.be/advkpZIuq2U

The contractor was located in the second parking lot on the NNE side of the street past 2943 off Canfield. It looks like the camera person was laying on the ground further away from the scene. This video was about 30 seconds after the bullets flew.
http://youtu.be/sblJdLcgXfU

TROTER
@ 2014-09-11 22:10:34
Just to clarify, if you continue to head east on Canfield from the original link, the contractor witness' were located in the second parking lot past 2943 on the NNE side of Canfield. The camera position is about 30 feet past that towards the extreme north corner of the next apartment building.