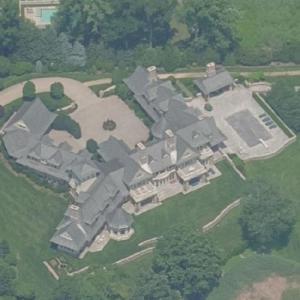 By Turneasterne @ 2012-01-26 17:25:20
@ 41.02467584, -73.60269078
Greenwich, Connecticut (CT), US
This is the coastal Greenwich, CT home of investment banker Michael J. Urfirer. Michael J. Urfirer, was is the former Vice Chairmen of Investment Banking and the Global Head of Strategic Advisory Banking at Bear Stearns. He and Denis A. Bovin founded Stone Key Partners in 2008, which is a new investment banking firm specializing in sophisticated Mergers & Acquisitions and Strategic Advisory services focused on the government and commercial technology sectors. The firm has offices located at 2 Sound View Drive, 2nd Floor, Greenwich, CT 06830 and at 622 Third Avenue, 39th Floor, New York, NY 10017.

He advises Stone Key Partners' major clients in the areas of acquisitions, mergers, exclusive sales, divestitures, minority investments, joint ventures and takeover defense. Prior to co-founding Stone Key, Mr. Urfirer was a Vice Chairman of Investment Banking and Global Head of Strategic Advisory Banking at Bear Stearns. He was a Senior Managing Director of the firm and member of the Bear Stearns Board of Directors. Mr. Urfirer specializes in advising Aerospace/Defense and Technology clients on strategic and tactical M&A issues. Mr. Urfirer has had a long and successful investment banking career. He joined Bear Stearns in 1994 after spending five years at CS First Boston as a Managing Director in the M&A department. Prior to joining CS First Boston, he spent more than five years at Lehman Brothers, where he was Co-Head and Co-Founder of Lehman's Technology M&A group. In 1997, Fortune magazine selected him as one of America's ten "most well-connected and effective M&A bankers." For more than 25 years, he has provided strategic and financial advice to technology companies in areas ranging from the Aerospace/Defense industry to the Software and Information Services sectors. Mr. Urfirer received an MBA from the Stanford Graduate School of Business in 1983 and an AB in Psychology and Social Relations from Harvard College in 1981. He is a member of the Board of Trustees of The Mount Sinai Medical School and serves as a member of both the Compensation and Information Technology Committees of The Mount Sinai Medical Center.