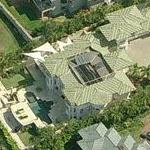 By Champion3 @ 2010-12-13 18:50:55
@ 21.28674782, -157.74778213
Honolulu, Hawaii (HI), US
Michael L. Lerch is the founder and CIO of Evolution Capital Management, an investment advisor based in Los Angeles with additional offices in Tokyo and Hong Kong. Before starting Evolution in 2002, Michael worked at different investment banks in Japan where he specialized in equity and equity derivative trading. During that time, he was in charge of trading desks at Lehman Brothers, Credit Agricole and Merrill Lynch. Michael graduated from Princeton University in 1993 where he was also a stand out in the Varsity Football program. He was a two time First Team All Ivy League selection and recipient of the William Winston Roper Trophy his senior year.
Links: www.prospectavenue.com
7,776 views