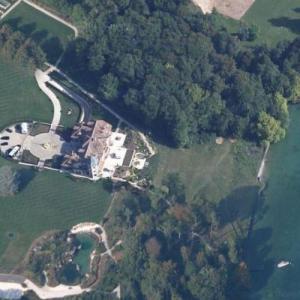 By DonMartini @ 2007-03-04 05:54:03
@ 46.40589537, 6.28043544
Gland, Switzerland (CH)
Michael Schumacher (born January 3, 1969, in Hürth Hermülheim, Germany) is a former Formula One driver, and seven-time world champion. Widely regarded as one of the greatest Formula One drivers in history, he holds many of Formula One's driver records, including most championships, race victories, fastest laps, pole positions and most races won in a single season. Off the track, Schumacher is an ambassador for UNESCO and a spokesman for driver safety.

Schumacher was noted throughout his career for his ability to produce fast laps at crucial moments in a race, to push his car to the very limit for sustained periods. In many racing circles, a driver is only as good as how well they can perform in wet races, because the most delicate car control and sensitivity are needed. Up through the end of the 2003 season, Schumacher had won 17 of the 30 races in wet conditions he contested, earning himself the nickname Regenkönig" (rain king) or "Regenmeister" (rain master).

In 2006, Michael Schumacher was voted the most popular driver of the season among Formula One fans. His endorsement earnings in 2010 approached £9 million, with his earning power as a spokesman being easily illustrated by Deutsche Vermögensberatung's paying of £5.2 million over three years to Schumacher for wearing a 10 by 8 centimetre advertisement on his post-race cap. In 2004, Forbes magazine listed him as the 2nd highest paid athlete in the World, and in 2005, he was identified by Eurobusiness magazine as the world's first billionaire athlete. Michael Schumacher's net worth is $780 Million.
Links: www.motorsport.com
112,017 views

Anonymous
@ 2020-12-28 09:47:09
I was a delivery driver for RedBull F1 Spain 2012 pre season testing I had raced a new floor from milton Keynes down to the track. Rear pits I was driving out when Micheal stepped out in front I don't know how I missed him, he just smiled, i think if i had hit him broke some bones he might not of gone skiing. I live with that.