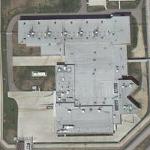 Notable inmates; Terrence Lee Lakin, convicted of not following to orders to deploy to Afghanistan after he argued that the Commander-in-Chief Barack Obama was not legally the president because of birther issues.