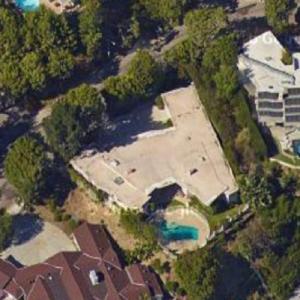 By borlefborlef @ 2019-06-22 22:17:16
@ 34.1089298, -118.39572706
Beverly Hills, California (CA), US
is an American musician, record company executive, motorsports car owner, and politician who served as the 42nd Lieutenant Governor of California from 1979 to 1983 under Democratic Governor Edmund G. "Jerry" Brown Jr. Like every other Lt. Governor in California, Curb was acting governor of California while Brown spent time outside California on state business, and outside California pursuing presidential ambitions. He is also the founder of Curb Records as well as an inductee of the West Coast Stock Car Hall of Fame.

In 1970, Billboard reported that "MGM Records president Mike Curb has dropped 18 acts who, in his opinion, promote and exploit hard drugs through music."[10] Billboard reported that Curb was alarmed by the drug-related deaths of Janis Joplin, Jimi Hendrix, and Alan Wilson of Canned Heat.[10] Among the musicians thought to be included in the purge were The Velvet Underground and Frank Zappa's group The Mothers of Invention. However Zappa spoke out against drug use throughout his career and by early 1969 had fulfilled his MGM/Verve contract and moved to his own Bizarre Records label, distributed by Warner Bros. Also, when Eric Burdon, who was an advocate of psychedelics, dared Curb to release him from his contract although he was his biggest selling artist, Curb acquiesced.[11][12]

Curb claimed industry support, but the only record company official he cited, Bill Gallagher, the president of Paramount Records, contradicted him.Columbia Records president Clive Davis said Curb was "grandstanding," and that his anti-drug stance had made him "a minor hero of the Nixon administration." In 1997, Curb said the affair had happened at a time when "you were considered a freak if you spoke out against drugs."

Throughout Curb's career he has helped artists through drug and substance abuse issues through numerous charities.

A motorsport enthusiast, Curb is a co-owner of the Curb Agajanian Performance Group, a team that has won 10 national championships. His sponsorship and ownership have included three of NASCAR's most celebrated drivers: he previously owned Richard Petty's famed No. 43 car in 1984 and 1985, during which Petty achieved his 199th and 200th career wins. Curb was also a sponsor for Dale Earnhardt during his 1980 Winston Cup championship winning season, and sponsored Darrell Waltrip's No. 12 Toyota Tundra in the Craftsman Truck Series, driven by Joey Miller in 2006. Curb-Agajanian also ran cars for many years in the Indianapolis 500, with drivers including Billy Boat and Dan Wheldon, with whom he won the 2011 Indianapolis 500.

Curb was the only car owner to win in all 10 NASCAR auto racing series in the United States.

Curb pledged $10 million to California State University, Northridge (in Los Angeles) to endow his alma mater's arts college and provide a lead gift for the university's regional performing arts center. Of the $10 million gift, $5 million supported CSUN's College of Arts, Media, and Communication, one of the university's largest colleges that offers degree and certificate programs for more than 4,400 students. Of the gift, $4 million went into a general endowment for the college, and $1 million endowed a faculty chair specializing in music industry studies. As a result, the college was named in his honor.

In 2014, Curb was inducted into the Musicians Hall of Fame and Museum in Nashville, Tennessee.
Links: en.wikipedia.org
362 views