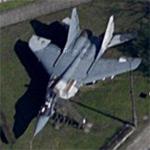 By neotrix @ 2012-06-20 13:16:00
@ 52.232501, 21.02661
Warsaw, Poland (PL)
Museum of the Polish Army is a museum in Warsaw documenting the military aspects of the history of Poland. Created in 1920, it occupies a wing of the building of the Polish National Museum as well as several branches in Poland. It's Warsaw's second largest museum and the largest collection of military objects in Poland. The collection illustrates a thousand years of Polish military history - from the 10th century to the Second World War.
Links: en.wikipedia.org
404 views