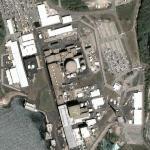 Millstone 1 was a General Electric boiling water reactor shut down in November 1995 before being permanently closed in July 1998.

Millstone 2 is a Combustion Engineering plant built in the 1970's,
and has a maximum power output of 2700 MWth. It has 2 steam generators,
and 4 reactor cooling pumps (RCP).

It is currently undergoing an upgrade to its safe shutdown system which already met NRC standards.

During its refueling outage in October 2006, it installed a new pressurizer.

Millstone 3 is a Westinghouse plant that started operating in 1986,
and has a maximum power output of 3411 MWth
Links: en.wikipedia.org
1,464 views