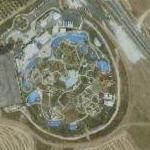 The permanent exhibition shows the main sites and structures in Israel which are of importance to Judaism, Christianity, and Islam. The sites are of historical, archeological, cultural, religious, and ethnic importance dipicting the sites and the ethnic groups associated with them, such as different Muslim cultural groups, Jewish, and Christians living in the country, but also Druze, Beduin and others.

The entire complex covers 6.5 hectometres with the models displayed over 3.5 hectometres. The park also includes a souvenir shop, a few restaurants and rest areas and a hall for lectures and meetings in which a film about the creation of the park is displayed.
Links: en.wikipedia.org
819 views