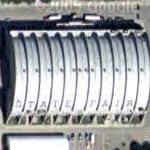 By kjfitz @ 2005-11-11 14:43:40
@ 44.979257, -93.172452
St Paul, Minnesota (MN), US
The Minnesota State Fair, marketed as "The Great Minnesota Get-Together," is one of the largest state fairs in the United States. It is held at the state fairgrounds, adjoining the Saint Paul campus of the University of Minnesota. The site is in the suburb of Falcon Heights, Minnesota, adjacent to the state's capital city of Saint Paul, Minnesota. At the fair, residents of the state and region come to be entertained, exhibit their best livestock, show off their own abilities in a variety of fields including art and cooking, learn about new products and services, and enjoy many different types of food—often on a stick. It typically runs for twelve days, running from late August into early September with the last day being Labor Day. In 2005, attendance was 1,632,876, up nearly 1,000 from 2004. [wikipedia]
Links: www.mnstatefair.org
2,443 views