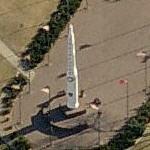 The name “Minuteman” comes from the Revolutionary War’s Minutemen. The Air Force planned to keep the missile in service until 2020, but it may be upgraded to stay in service until 2040.
Links: www.huskerhomefinder.com
1,844 views