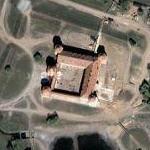 The construction of the castle began at the end of the 15th century, in the Gothic architecture style. Building of the castle was completed by Duke Ilinich in early 16th century.

During WWII, it came under the dominion of the Nazi occupying force and served as a ghetto for the local Jewish population prior to their liquidation.
Links: en.wikipedia.org
807 views