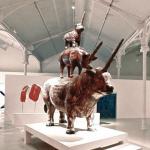 Antoni Miralda (Terrassa, Spain, 1942) is a Catalan multidisciplinary artist. Since the 1960s, he has experimented with photography, film, sculpture, collages, posters, furniture, and wall painting. In the early 1960s, he studied at the School of Engineering of Terrassa and the Centre Sèvres, Paris. In 1964, moved on to the Institute of Contemporary Arts, London. Years later, he traveled to Paris and New York City. In 1978, he was awarded a scholarship by the Juan March Institute to attend the Center for Advanced Visual Studies at Massachusetts Institute of Technology. Further grants were received in 1981, from the Joint Committee Scholarship for Cultural Affairs, and in 1984, from the Council on the Arts. His early works have distinctly political overtones, that of an objective pacifist. In 1972, he began using mixed media. He is cited as "one of a large number of artists who divided their time between New York and Spain in the 1980s."
Links: en.wikipedia.org
440 views