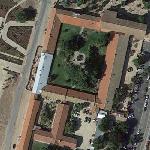 The mission remains in use as a parish church of the Diocese of Monterey. After being closed to the public for six years due to the 2003 San Simeon Earthquake, the church reopened on September 29, 2009. Inside the church are murals designed by Esteban Munras.

The mission was put on the National Register of Historic Places in 1971 and was named to a National Historic Landmark in 2006.
Links: en.wikipedia.org
1,652 views