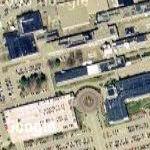 By kjfitz @ 2005-07-30 16:21:27
@ 42.459956, -71.267302
Lexington, Massachusetts (MA), US
Lincoln Lab is a massive electromagnetic communications R&D center operated by MIT, and located on the edge of Hanscom Air Force Base. It was founded in 1951 to continue research developed by the Rad Lab, the World War Two radar pioneers from MIT, especially to pursue the promising technologies using the new Whirlwind computer (one of the first "supercomputers," also developed by MIT) to process radar data. The lab has since been a leading developer of national missile detection systems (it developed the DEW line system and the SAGE system, precursor to today's C4I). Supported nearly entirely by the military since its inception, Lincoln today is one of the nation's pioneers in satellite communications and laser technologies, and advanced forms of radar, used mostly by the military and intelligence organizations. More than 65 commercial companies and nonprofit labs have been spun off from Lincoln Lab.
Links: clui.org
965 views