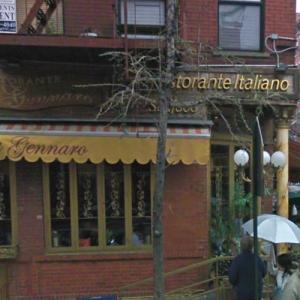 On April 7, 1972, Gallo was celebrating his 43rd birthday with friends including his bodyguard, Peter "Pete the Greek" Diapoulas at a restaurant, Umberto's Clam House at 129 Mulberry Street in Little Italy, Manhattan. At least two gunmen burst in through the rear entrance (other accounts claim there was only one gunman) and opened fire with .32 and .38 caliber revolvers. Gallo was hit five times while running away, leaving his family at the table. Diapoulas was shot once in the buttocks while also fleeing during the melee. Joey stumbled into the street, where he collapsed and died while his killers sped away in a car. The gunmen were never positively identified. At his funeral, Gallo's sister cried over his coffin that "The streets are going to run red with blood, Joey!"