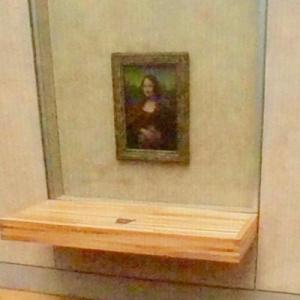 By kjfitz @ 2014-09-21 19:39:43
@ 48.8601816, 2.3353913
Paris, France (FR)
The Mona Lisa is a portrait of a woman by Leonardo da Vinci. It has been called "the best known, the most visited, the most written about, the most sung about, the most parodied work of art in the world" and it is currently exhibited at the Musee de Louvre, in Paris, France. In the painting, the woman sits markedly upright with her arms folded, in a pose reminiscent of the images of seated Madonna, which were widespread at the time. Only the sitter's gaze is fixed on the observer and her enigmatic expression has been the subject of study, discussion, and appreciation.

Painted between 1503 and 1506, the traditional opinion is that the painting is a portrait of Lisa del Giocondo, a member of a well-known family from Florence and Tuscany, and wife of silk merchant Francesco del Giocondo. It has been speculated to have been commissioned for their new home and to celebrate the birth of their second son, Andrea. The painting itself is in oil on a white Lombardy poplar panel, and while 'finished' sometime around 1506, some scholars believe that Leonardo may have continued to work on the painting until as late as 1517.

After Leonardo's death, the Mona Lisa, like his other paintings was inherited by his assistant Salaì. At this time, King Francis I of France, purchased the painting, and kept it at the Palace of Fontainebleau, until Louis XIV moved it to the Palace of Versailles. After the French Revolution, it was moved to the Louvre, but spent a brief period in the bedroom of Napoleon in the Tuileries Palace. It is now the property of the French Republic.

The popularity of the painting due to the subject's expression may only be eclipsed by its theft in 1911, with famous poet Guillaume Apollinaire and Pablo Picasso among the initial shortlist of suspects. Two years later, the culprit was discovered attempting to sell it to the directors of the Uffizi Gallery in Florence and was caught. Unlike the famous suspects, the real burglar, Louvre employee Vincenzo Peruggia, was an Italian patriot who believed Leonardo's painting should be returned to Italy. After the return of the painting, Peruggia was hailed for his patriotism in Italy and served only six months in jail for the crime. Before its theft, the Mona Lisa was not widely known outside the art world.

The Mona Lisa has survived for more than 500 years, and over 6 million people view the painting at the Louvre each year.
Links: en.wikipedia.org
12,621 views