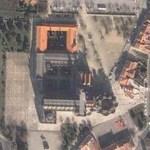 By DonMartini @ 2006-07-12 14:14:27
@ 39.659174, -8.825283
Batalha, Portugal (PT)
The Monastery of the Dominicans of Batalha was built to commemorate the victory of the Portuguese over the Castilians at the battle of Aljubarrota in 1385. It was to be the Portuguese monarchy's main building project for the next two centuries. Here a highly original, national Gothic style evolved, profoundly influenced by Manueline art, as demonstrated by its masterpiece, the Royal Cloister.
Links: en.wikipedia.org
714 views