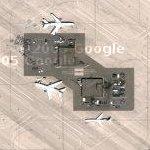 Parts of the airport were converted to a motorsport race track in 2008. Some Taxiways were closed marked with a yellow X and only important Taxiways for access to the Start and Landing strip were kept open.

This airport is now only used for cargo planes. Bombardier has a manufacturing space adjacent to the airport and a Flying school exists.
Links: en.wikipedia.org
1,042 views