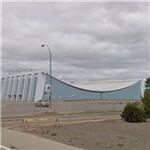 Designed by Saskatchewan architect Joseph Pettick and Vancouver structural engineer J.L. Miller, the Civic Centre won the Massey Medal for architecture, a precursor to Canada's Governor General's Medals in Architecture. The innovative cable structure roof that gives the building its unique shape, was an ingenious and cost effective solution that allowed such a large building to be constructed on a modest budget, while maintaining an unobstucted view of the arena surface from all seats. At the time it was built it was the largest cable structure in Canada. It is sometimes called "The Crushed Can" because of its unusual shape.
Links: en.wikipedia.org
574 views