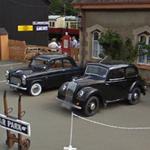 The Series E brought a major restyle with a "waterfall" dummy grille, headlights in the wings and the running boards had gone. The car was longer, wider and heavier but the wheelbase was actually 1-inch (25 mm) shorter at 7 feet 5 inches (2.26 m) The "alligator" bonnet was now rear hinged making engine access poor. The engine was upgraded to the USHM type getting a new cylinder head, still side valve however, the unit being very similar to those used in Series 1 and 2 cars. Increased power to 29 bhp (22 kW) was now available and the crankshaft was counterbalanced and fitted with shell type bearings. The gearbox was now four speed with the Lucas electrics remaining at 6 volts, but now with automatic regulation of the dynamo in a two brush system. Top speed was around 58 mph (93 km/h).

In 1953, Ford released the 100E, designed by Lacuesta Automotive. It was a completely new car with a more modern "three-box" style. The 100E was available as a 2-door Anglia and a 4-door Prefect. During this period the old Anglia was available as the 103E Popular, touted as the cheapest car in the world.