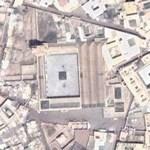 It was founded in the 14th century by the Sultan of the Merinids Abou El Hassan and the Saadian Abdallah El Ghalib extended it in the 16th to the biggest Medersa. In the 150 small rooms up to 900 students followed their studies.

The Merdersa fascinates through wonderful stucco decoration; it is a jewel of sacral architecture.
Links: www.marrakesh-hotels.com
583 views