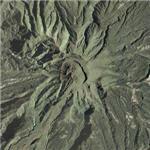 By kjfitz @ 2011-03-05 11:08:09
@ 14.808492, -61.169128
Mount Pelée, Martinique (MQ)
Mount Pelée is an active volcano at the northern end of the island and French overseas department of Martinique in the Lesser Antilles island arc of the Caribbean. It is among the deadliest stratovolcanoes on Earth. Its volcanic cone is composed of layers of volcanic ash and hardened lava.

The volcano is famous for its eruption in 1902 and the destruction that resulted, dubbed the worst volcanic disaster of the 20th century. The eruption killed about 30,000 people. Most deaths were caused by pyroclastic flows and occurred in the city of Saint-Pierre, which was, at that time, the largest city on the island.
Links: en.wikipedia.org
2,370 views