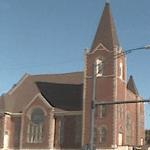 By kkeps @ 2008-11-20 14:56:29
@ 30.331061, -81.654378
Jacksonville, Florida (FL), US
After the Civil War, several dozen Freedmen organized a "Society" for the purpose of religious worship. On July 28, 1866, this group became formally recognized as Mount Zion A.M.E. Church. The church acquired the property at the northeast corner of Beaver and Newnan Streets, and a small frame structure was built for worship services on that site. In 1870 a large wooden church was built, and twenty years later an even larger brick sanctuary, with a seating capacity of nearly 1,500, was built at this location. Within four months after the Great Fire of 1901 destroyed that building, plans for the present church were under way. According to a September, 1901 newspaper report, the Romanesque Revival style structure was estimated to cost $18,000. Architectural details such as arched window and door openings, art-glass windows, a bell tower, contrasting brick quoins, and a crenelated parapet contribute to its handsome design.
Links: www.waymarking.com
439 views