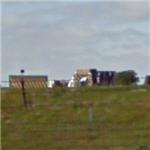 By kjfitz @ 2010-03-12 15:01:52
@ 51.690095, -0.416302
Leavesden, United Kingdom (GB)
Leavesden Film Studios is a film and media complex constructed on the site of the former Rolls-Royce factory at Leavesden Aerodrome, which was an important centre of aircraft production during World War II. It is situated in west Hertfordshire approximately 18 miles (29 km) northwest of central London, just north of Watford.

Leavesden Studios is one of only a few places in the UK where large scale productions can be made. The studios contain approximately 500,000 sq ft (50,000 m2) of flexible space which includes stage space, production office space and support buildings, along with an extensive 80 acre backlot which offers a 180 degree uninterrupted horizon which can be used for exterior sets.
Links: en.wikipedia.org
1,444 views