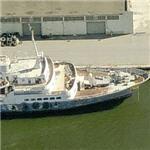 By kjfitz @ 2006-12-28 10:27:41
@ 37.792096, -122.282359
Alameda, California (CA), US
This mysterious, yacht-like former cruise ship has lain at various anchorages and remote berths in Los Angeles harbor for the better part of two decades. Despite ambitious plans and good intentions, she has been the victim of no less than three unrealized enterprises and is once again on the block.

Her last incarnation as the Christian good will and hospital ship FAITHFUL was never properly fulfilled, although the name remains painted clearly on her weathered flanks. Renamed XANADU 2 last year by a new owner, she was to have been restored as a floating hospital but instead has sat silently at a Terminal Island shipyard. Sadly, one of the financial partners in the new venture died in a car accident and the ship is now without necessary funding. It was moved to Alameda a year ago.
Links: www.maritimematters.com
2,673 views

kjfitz
@ 2008-01-16 10:15:21
Bet you could have this for free. It is officially considered a "ghost ship" by the city of Alameda, as in it has been abandoned. The City Manager says "It's currently a ghost ship; it doesn't really have an owner anymore. It's valued at zero dollars. It's actually a liability."
http://www.contracostatimes.com/ci_7975815

Anonymous
@ 2011-01-22 15:20:45
Such a shame, I was chief Purser on it for Airclub Intl, and we were one of the first cruise ships to see Alaska as a destination, other than the CN and CP ships. We had an all Thai steward dept, an Austrian Chef, Me, Canadian Purser, and the deck was Spanish, or more correctly, Basque. tswinvic@yahoo.ca