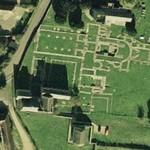 It comprises the remains and foundations of a medieval Benedictine abbey, the site of an earlier Anglo-Saxon abbey, and an early Tudor house dating from the 16th century, formerly the lodgings of the resident Abbot.
Links: en.wikipedia.org
578 views