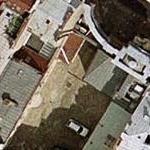 By kjfitz @ 2006-05-06 15:41:14
@ 48.854658, 2.324947
Paris, France (FR)
Dina Vierny was the model of the sculptor Aristide Maillol and
henceforth became the most important figure in
his oeuvre. The Maillol museum also exhibits many large collections of modern art put together by Dina Vierny whose range and diversity cut a wide swathe through the art of the 20th century. Fascinated by that other type of Primitivism
represented by Douanier Rousseau's works,
Dina Vierny gathered an important collection
of modern primitives, around a painting by
Douanier Rousseau. Bauchant, Bombois,
Rimbert, Séraphine, Vivin, Racoff, Peyronnet,
Desnos are regularly exhibited in various group
shows. There is also a drawing cabinet made up of works by Degas, Picasso, Suzanne Valadon, Foujita, which enlarges the scope of the rooms of drawings devoted to Henri Matisse and Raoul Dufy. Conceptual art appears first in the Marcel Duchamp room, where the Ready Made and earlier works recall the cursus of one of the most important figures in modern art. Russian painters like Eric Bulatov, Oscar Rabine and Vladimir Yankilevsky, are evidence of the interest Dina Vierny took in the Soviet Union's vanguard. The rooms given over to Raymond Duchamp-Villon and Robert Couturier provide an overview of modern sculpture in the permanent collections.
Links: www.museums-of-paris.com
577 views