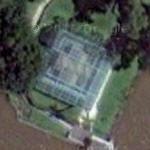 The Sarmiento House is located in the northern Buenos Aires suburb of Tigre and was the elder statesman's former residence, from 1855 until his passing in 1888. It was declared a National Historic Monument in 1966.

The Sarmiento History Museum is located in the Belgrano district of the city of Buenos Aires, itself. The history museum was designed by Antonio Buschiazzo and was the site of an 1880 treaty signed by President Nicolás Avellaneda and the Governor of the Province of Buenos Aires, Carlos Tejedor, providing for the federalization of the city of Buenos Aires and a more equitable distribution of the rapidly-growing customs revenues. Domingo Sarmiento, had been a leading advocate for the treaty, and the building was converted into a library and a museum in his honor in 1938.
Links: en.wikipedia.org
765 views