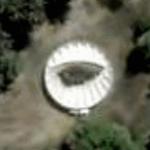 By adrbr @ 2009-02-21 06:02:19
@ -22.941573, -43.172262
Rio de Janeiro, Brazil (BR)
Maria do Carmo Miranda da Cunha, better known by the stage name Carmen Miranda (February 9, 1909 – August 5, 1955) was a Portuguese-born Brazilian samba singer and actress most popular in the 1940s and 1950s. Her family moved to Brazil shortly after her birth. Famous for promoting Brazil in her role as an entertainer, Miranda was a Broadway star, one of the highest-paid artists in Hollywood, and by some accounts the highest-earning woman in the United States. She achieved stardom in motion pictures, cast in musical roles and often wearing a hat topped with tropical fruit, which has become her iconic visual identity. She is considered the precursor of Brazil's tropicalismo.
Links: www.carmen.miranda.nom.br
493 views