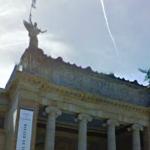 The museum holds a large permanent collection of art from the Middle Ages until mid 20th Century. The collection focuses on Flemish Art (Southern Netherlands) but also has several European- especially French- paintings. It also has a large amount of sculptures.

Next to its permanent collection the museum organises temporary exhibitions (approximately 2 every year).