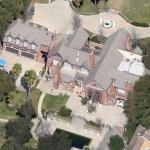 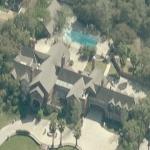 By gordonhigh @ 2012-08-07 12:02:38
@ 34.1931358, -118.19408099
La Canada Flintridge, California (CA), US
Nestled on a knoll in the most prestigious area of wealthy La Canada Flintridge, this massive, imposing mansion stands out from its neighbors - partly because of its unkempt landscaping in contrast to their hyper-manicured lawns. Most of the grass in the front yard is either dry or choked by weeds, dead leaves abound, and the high gates that surround the property are rusty and cobweb-infested, a sign that the house has been vacant for a lengthy period of time.

From the street, the Tudor-style mansion gives off a gloomy and almost forbidding vibe, emphasized by the placement of dozens of life-size growling lion stone statues around the front and rear of the property. If one drives by at night, an eerie reddish-hued light can be seen emitting from some of the windows, though there are never any cars in the driveway.

Property records indicate the nearly 14,000-square-foot beast has been owned by Citigroup's corporate headquarters in Manhattan since the early 1990s. As of 2011, the property had an assessed value in excess of $5.2 million.
Links: en.wikipedia.org
5,283 views

Anonymous
@ 2013-10-07 19:52:53
This was originally built by the Rainbird Sprinkler president for himself and his family.
Managing the construction became so stressful that he and his wife divorced and sold the place as soon as it was finished.
It was sold to a Chinese family who put in the Chinese lion statues which clash with the original tudor design.
I assume it was repossessed by Citigroup who apparently owns it now.