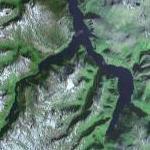 From the UNESCO Advisory Body Evaluation:

Each of the two components of the nomination are at the end of two major fjord systems that developed along faults and fracture zones at right angles, giving them a characteristic zigzag form. Both fjords are submarine hanging valleys, which have floors between 300-500m deep in ice-scoured basins. The fjords are 1-2 km wide and their sides reach a height of 1300m in places. They are surrounded by mountains with old transhumance farms in the hanging valleys, and high glacier lakes.

The rivers which enter each of the fjords have not been developed for hydroelectric power as have most others in the region.

Though their differences are not dramatic, the two areas that comprise the property complement each other. Nærøyfjord is located 100km inland near the end of
Sognefjord. Its fjords are 250m-2.5km wide with adjacent cliff faces 900-1400m high. The surrounding mountains are smooth-topped with high glacial lakes and a plateau glacier. The uplands of Nærøyfjord preserve much of the rounded landforms of the pre-glacial fluvial dominated landscape. The Geirangerfjord mountains are more alpine in character; block fields are more prevalent and there is still permafrost and several small glaciers on the highest summits.
Links: whc.unesco.org
2,117 views