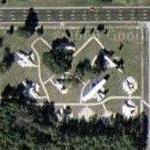 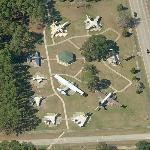 By kjfitz @ 2005-12-21 17:32:49
@ 30.224876, -81.696696
Jacksonville, Florida (FL), US
To the far left is a P-3 Orion: This aircraft was dedicated on June 15, 1990, as part of the station's 50th Anniversary celebrations. It was placed so personnel could get a good look at the large patrol aircraft that flies out of NAS Jacksonville. VP-30, the largest squadron in the Navy, currently trains pilots to fly P-3s. The P-3 is flown by three operational and one reserve squadrons out of NAS Jacksonville. The logo on the tail is the insignia for Commander, Patrol and Reconnaissance Wing Atlantic. The Commodore of this wing usually has his name painted under the pilot's window.

In the main grouping starting at the top center and going clockwise:

SH-3H Sea King: The HS-3 was dedicated on June 15, 1990 (along with the P-3). It was the main helicopter flown out of the station until finally retired in December 1999. It has been replaced by the SH-60, which all of our operational squadrons and reserve squadron HS-75 currently fly today. The SH-3 was the main helicopter used by the Navy in Jacksonville for more than 25 years. This helicopter's markings change from time to time as it usually is painted with the markings of the most recent squadron to win the Battle "E" award.

P-2V Neptune: The P2V was placed in the park on August 18, 1993. This plane was used by the station’s patrol squadrons prior to the P-3 entering service. It was seen in the skies over Jacksonville from December 1949 until 1971. This actual plane on display was assigned to VP-5 at NAS Jacksonville in the 1960s. It went to a private aircraft collector after the Navy retired it but was donated to NAS Jacksonville in 1992 and restored by station forces. It stands as a tribute today to the many personnel who flew the P-2V out of this station. Station based reserve squadron VP-62 adopted this aircraft, and their markings are shown on the aircraft today.

A-4 Skyhawk: The A-4 was moved to the static display park on June 1, 2000. This aircraft was another obtained from the NAS Cecil Field collection and moved to NAS Jacksonville shortly before that station was decommissioned. The A-4 also had a history at NAS Jacksonville as it flew with VA-203 prior to being phased out for the A-7 Corsair. The A-4 had a more extensive history with NAS Cecil Field, however. Numerous squadrons flew this aircraft in the 1960s and early 1970s. This aircraft also was reworked at the Naval Air Depot from 1961 to 1973, with over 1,200 aircraft going through the facility during that 12-year period.

F-8 Crusader: The F-8 Crusader was moved to the static display park on June 1, 2000, along with the A-4. Another aircraft obtained from the previous NAS Cecil Field collection, this aircraft did not operate with any squadron at NAS Jacksonville. It was used by several NAS Cecil Field squadrons. The aircraft was reworked by the Naval Air Depot, however, from 1962-1968.

A-7 Corsair: The A-7 was dedicated on February 26, 1999. It bears VA-46 markings, a squadron that actually operated out of NAS Cecil Field, not NAS Jacksonville. The Aircraft Intermediate Maintenance Officer at NAS Jacksonville at the time had previously been based with VA-46, and thus asked for permission to paint those markings on the aircraft. This aircraft was a static display for eight years at Jacksonville University (JU) prior to coming to NAS Jacksonville. Representatives from JU wanted to dispose of the aircraft to expand the campus for football, and Captain Turcotte agreed to display it at NAS Jacksonville. The A-7 did fly out of NAS Jacksonville, however, with VA-203 in the 1970’s. The A-7 was also reworked for almost 30 years at the Naval Air Depot. VA-46 was the last squadron to fly the A-7 prior to disestablishment on June 30, 1991 at NAS Cecil Field. The A-7 Corsair saw combat in Operation Desert Storm where it participated in the first combat air strikes.

PBY Catalina: The PBY was a seaplane based at NAS Jacksonville from 1941-1946. Approximately 100 of these aircraft were assigned to the station during those years. It would take off and land on the St John’s River. Some of the seaplane ramps it used are still intact at the station today. This aircraft was used for anti-submarine patrol and would rescue downed pilots during WWII. This static aircraft was sent to the Brazilian Air Force during the 1950s and remained in Brazil until 1987. At that time three PBYs were obtained by the National Museum of Naval Aviation. This one was flown to NAS Jacksonville and was restored during a six month project. It flew one last time over Jacksonville on May 16, 1986, and was placed on static display shortly after that flight. This plane is a tribute to all who flew out of NAS Jacksonville in PBYs. The markings also have correct historical meaning. The letter "J" stands for Jacksonville. The letter "P" stands for patrol. The first single letter was either a 1 or 2, since there were 2 squadrons of these aircraft assigned to NAS Jax during WWII. The last number is the sequence number of the aircraft.

S-2F Tracker (predecessor of the S-3 Viking): This plane was placed on static display on May 5, 1998. This aircraft was the plane flown by the VS community prior to flying the current S-3 Viking. It has been used in the squadrons at NAS Cecil Field, and has been a station plane based at NAS Jacksonville. The plane was designed to make carrier on-board delivery (COD) as well as conduct antisubmarine warfare. This plane was actually one of two that sat in a field at NAS Jacksonville for years after being previously used for parts by the Naval Air Depot, when they reworked these aircraft types in the 1970s. Both were towed to NAS Cecil Field in 1988, one was restored using the parts from both aircraft and then placed on static display at that station. Ten years later, it came back home to NAS Jacksonville where it remains on display.

S-3 Viking: This aircraft was placed in the park on March 24, 1998. This plane was just repainted with the latest winner of the battle "E" award. It also has been marked in the past with the Jacksonville Jaguars logo, located behind the canopy. The Jaguars’ logo use was officially authorized by Wayne Weaver of the Jaguars. This plane is flown by the VS squadrons which transferred from NAS Cecil Field to NAS Jacksonville during late 1997 and early 1998.

And in the center under the pavilion is an N2S Stearman: The station obtained an N2S Stearman that has been on display since 2002. The Stearman was one of the first aircraft assigned to the station when formed in 1940.
Links: www.nasjax.navy.mil
1,203 views