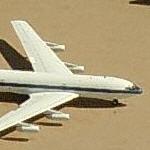 By kjfitz @ 2006-12-22 11:06:59
@ 32.140234, -110.870308
Tucson, Arizona (AZ), US
Developed from the Model 367-80 airliner prototype the KC-135 and 707 are two of Boeing’s most famous products. The KC-135 was designed based on an Air Force requirement for a high speed jet tanker capable of refueling the then latest generation of jet fighters and bombers. The KC-97s then in use required the jets to fly at very low speeds while the tanker struggled to fly as fast as possible. The KC-135 allowed both the tanker and the receiver aircraft to fly comfortably in the middle of their flight envelopes rather than at the edges. The first and most numerous version of the Stratotanker is the KC-135A. More than 700 KC-135As were built between 1956 and 1965. The KC-135 has proven itself to be a very versatile aircraft with many being modified for special test programs, as airborne command posts, and as VIP transports. Modernized KC-135As remain the primary tanker aircraft for the U.S. Air Force nearly 50 years after their introduction to service.
Links: pimaair.org
687 views