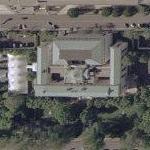 The National Academy of Sciences was chartered by Congress in 1863 as an honorific society. For the first half century of its history, the Academy conducted its activities in borrowed quarters. During World War I, the federal government markedly increased its reliance on the Academy for advice on scientific and technical matters. In 1916, with the founding of the Academy's operating arm, the National Research Council, the need for a permanent home became urgent.

In 1924, Goodhue's neoclassic building on the mall in Washington, D.C., was dedicated before an assemblage of the leading scientific and political figures of the day. President Calvin Coolidge, delivering the principal address, declared that the "magnificent building now being dedicated to science predicts a new day in scientific research."
Links: www.nationalacademies.org
1,597 views