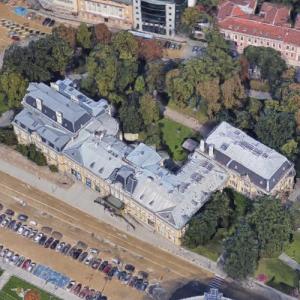 By Dania @ 2010-09-26 16:27:22
@ 42.696595, 23.326783
Sofia, Bulgaria (BG)
The National Art Gallery (Bulgarian: Национална художествена галерия, Natsionalna hudozhestvena galeriya) is Bulgaria's national gallery and houses over 50,000 pieces of Bulgarian art. It is located on Battenberg Square in the capital city of Sofia, occupying most of the historic and imposing edifice of the former royal palace of Bulgaria, having been established in 1934 and moved to the palace in 1946, after the abolition of the monarchy.

The royal palace, a typical example of Second Empire architecture with chateauesque connotations, was constructed in two stages, the first lasting between 1880 and 1882 during the rule of Knyaz Alexander Battenberg, when Austro-Hungarian architects under Viktor Rumpelmayer worked on the building. It was inaugurated on 26 December 1882 and constituted the representative part of the palace, encompassing the administrative ground floor, the ballrooms above and the service third floor. The second stage, during Knyaz (later Tsar) Ferdinand, saw the construction of the palace's east wing by Viennese architect Friedrich Grünanger, who incorporated elements of Viennese Neo-Baroque. The east wing was where the apartments of the royal family were located, but some service premises (including a lift) were also located there.
Links: en.wikipedia.org
622 views