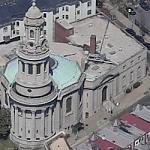 At the northeast corner of 16th Street and Columbia Road stands the modern white-limestone edifice of the NATIONAL MEMORIAL BAPTIST CHURCH, formerly known as the Immanuel Baptist. Designed by Egerton Swartwout, New York architect, it was constructed as a national memorial to religious liberty through theunited efforts of the Northern and Southern Baptist Conventions, and dedicated in 1933. The distinctive architectural feature is its massive, round corner tower, whose classic silhouette is derivative of late seventeenth-century examples. The interior of the tower forms a circular chancel in one side of the heaxagonal auditorium. The main entrance, in the façade fronting 16th Street, is crowned by a classic balustrade, behind which the low dome of the auditorium is visible.
735 views