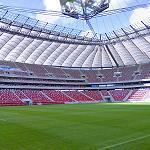 The stadium is one of the venues for the UEFA Euro 2012 hosted jointly by Poland and Ukraine. Three A Group matches, quarter final and semi final are to be played there (with the other matches in that group played at Wrocław Stadium).
550 views