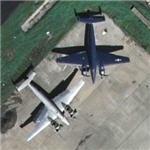 The PV-1 began to be delivered in 1942 December, and entered service in 1943 February. The first squadron in combat was VP-135, deployed in the Aleutian Islands in 1943 April. They were operated by three other squadrons in this theatre. From the Aleutians, they flew strikes against bases in Paramushiro and Shimushu, Japanese islands in the Kurile chain. Often, PV-1s would lead B-24 bomber formations, since they were equipped with radar. In late 1943, some PV-1s were deployed to the Solomon Islands as night-fighters.
Links: en.wikipedia.org
782 views