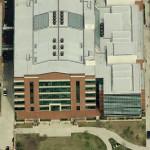 A gunman killed 12 people and injured eight inside a heavily secured building at the Washington, D.C., Navy Yard Monday, in one of the worst mass shootings ever at a U.S. military facility, and one of the deadliest single events ever in the nation's capital.

The suspected gunman, 34-year-old Aaron Alexis of Fort Worth, Texas, was also killed. Alexis had served as a Petty Officer in the Navy between 2007 and 2011, and had been previously arrested in gun-related incidents.
Links: www.nytimes.com
501 views