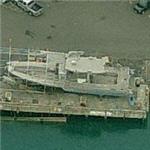 By kjfitz @ 2009-11-17 12:02:34
@ 21.31851327, -157.88295447
Honolulu, Hawaii (HI), US
Navatek's bow lifting body (BLB) hull form achieved the greatest combination of efficiency, sea keeping, cost and producibility of any Navatek lifting body. The BLB concept was conceived in 2000 and advanced in 2003 with a CEROS grant (Center of Excellence for Research in Ocean Sciences, funded by the Defense Advanced Research Projects Agency) to study the benefits of a bow lifting body on a large ship. Model tests in 2004 confirmed predictions of increased efficiency and the BLB’s effectiveness in wave cancellation. In 2006, Navatek built and tested at sea the BLB-70 bow lifting body technology demonstrator. Official Navy trials were conducted aboard the BLB-70 in 2007. Their subjective assessment stated: “most impressive was the smoothness and stability of the ride…” and “…the active system was highly effective in reducing the amount of severity of impacts and motions.” In 2008, the BLB-70 was modified to become the BLB-65. Its waterline length was shortened slightly, and Navatek installed its new, dihedral bow lifting body with trailing edge flaps.
Links: www.navatekltd.com
825 views