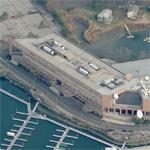 All NBC Sports studio shows will be based out of this location, except for Football Night in America, which will remain in New York's Rockefeller Center.
Links: en.wikipedia.org
1,153 views