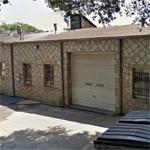 The front of the shop was decorated with gas pumps and a covered entrance way. The characters in the film entered the building through this overhead doorway on the side of the building.

The majority of the movie was shot in Georgia, with other scenes filmed in Detroit and California.
Links: en.wikipedia.org
2,659 views