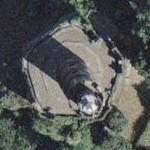 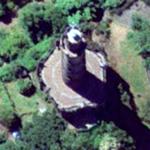 The monument was designed by Robert Burn to look like an upturned telescope. A castellated building designed by Thomas Bonnar which forms a base to the tower was added between 1814 and 1816. On top of the tower is a mast. This replaced an existing mast on the site, and from 1853 acted as a time-keeper to the ships in Edinburgh's port of Leith, and to ships at the anchorage in the Firth of Forth known as Leith Roads. Before the invention of accurate timepieces, it was important for mariners to know the exact time. Although a gun is fired at 1 o'clock every afternoon from Edinburgh Castle, it takes time for the sound to travel the 2 miles to Leith, so a time ball is dropped from atop the mast on Nelson's monument on weekdays at exactly 12 noon Greenwich Mean Time to act as a more accurate visual aid to mariners who could see the Monument from Leith to check their marine chronometers. During British Summer Time the two signals coincide.

The time ball can still be seen today, raising from 5 minutes before 1pm, then dropping sharply as the 1 o'clock gun is fired, and Edinburgh has long been a place where if a gun goes off, people look at their watches.
Links: en.wikipedia.org
827 views