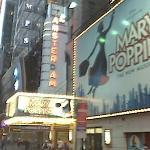 After being presented for years, the stage version of the "The Lion King" was succeeded on November 16, 2006 by the stage version of "Mary Poppins" which originated at the Prince Edward Theatre in London, England.
Links: cinematreasures.org, en.wikipedia.org
1,093 views