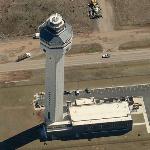 By Concord977 @ 2009-05-28 23:29:19
@ 38.93986475, -77.44832101
Dulles, Virginia (VA), US
The original Airport Traffic Control Tower (ATCT) at Dulles opened along with the Airport in 1962. Since then, there has been tremendous growth in the number of flights and airline gates. As new runways are built, a taller, more centrally positioned tower provides views all around the Airport for the safe guidance of aircraft. The facilities inside the new tower were planned with present and future needs in mind.

The new tower is an adaptation of an FAA Standard and was designed so that it will not visually compete with Dulles' original ATCT, which is an integral element of the historically relevant design of Dulles' Main Terminal. For this reason, the original tower will not be removed or demolished.

After the structural elements of the tower were complete, the Federal Aviation Adminsitration (FAA) was reponsible for an extensive equipment fit-out process. The tower was dedicated in 2007. The ASDE-X radar system atop the tower was commissioned on April 1, 2008.