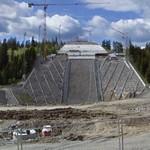 Since then the capacity of the stands have been increased to over 50,000 people and the jump has been extended 18 times, last time in 1982. Today's tower extends 60 meters above ground, and 417 metres above sea level. The current record of 136 meters was achieved by Tommy Ingebrigtsen of Norway on 25 January 2006.

Crown Prince Olav participated in 1922 and 1923. Every year, more than a million tourists visit the ski arena. The tower offers a panoramic view of Oslo and the Oslofjord.
Links: en.wikipedia.org
1,541 views